By Martin Smith, with thanks to everyone who contributed their reminisences – and especially the erstwhile and unwitting guardian of the Trophy, Roger Emerson. -- 14 March 2016

We had either forgotten about it, or never knew it existed! In January 2016 the Povah-Best Trophy was returned to the Club after perhaps 40 years in Roger Emerson’s attic. In the dim and distant past it was likely awarded to the winner of the Club Championship – though we aren’t really sure on this point. 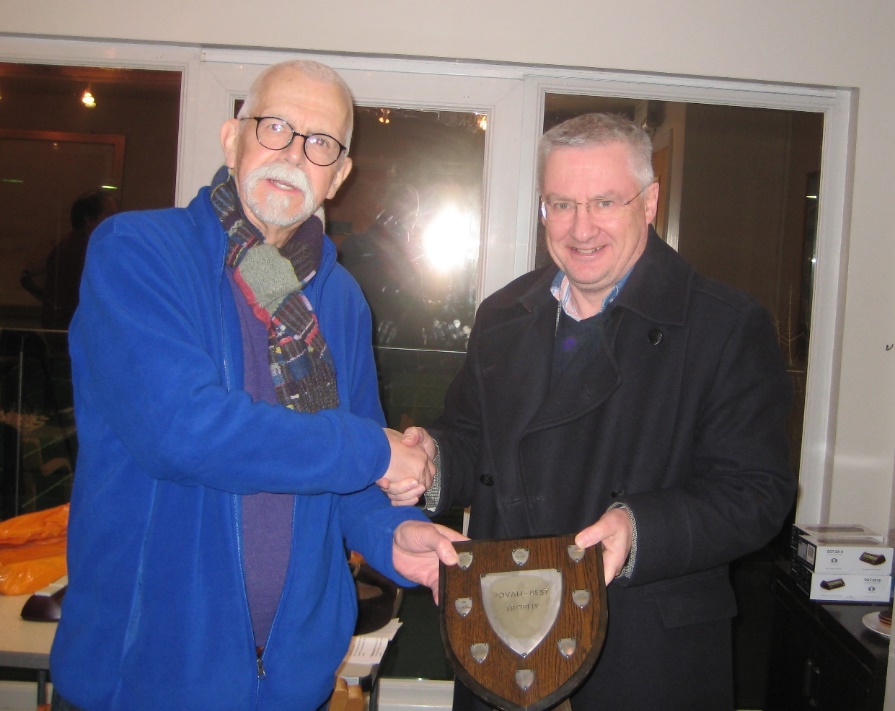 Roger (here on the right; your grateful correspondent is on the left) was a stalwart in the Club’s glory days in the late 1970s (see Knightmare! issues and digest ). Roger now plays for Guildford and runs their highly successful 4NCL team. He re-discovered the Trophy, along with some other booty, when doing a spot of decluttering.

One of Roger’s S&B co-conspirators in those far-off days was Nigel Povah, who also can be found at Guildford CC. It would have been his grandfather, William Tanner Povah whose name is joined with Mr Best on the Trophy. Povah Senior re-activated the now combined Streatham and Brixton Chess Club in 1946, at the end of WW2, and was its first post-war President. Records show that E.C. Best began as a member of the then separate Streatham CC from at least 1933. He was also a South Norwood CC member before the War. He died in 1956, and Walter in 1959 or 1960, so it seems likely that the Trophy was created as a memorial to those lynch-pins of the nascent amalgamated S&BCC.

Sadly it is not exactly an unusual museum piece, and is rather worn by over-zealous polishing. 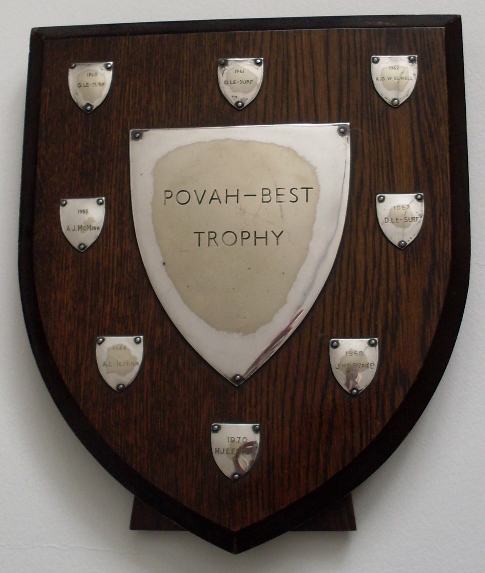 Here is what is now remembered about the winners of the Trophy: D. Le-Surf (1960, 61, and 1967), R.G.W.Elwell (1962), A.J.McMinn (1965, and 66), J.H.E.Drake (1968), and M.J.Lester (1970). Messrs. Macminn (his name was maybe misspelt on the Trophy) and Lesurf (also subject to imaginative variations), together with a third junior, B.L. Tombleson, were known in local chess circles as the “Sticky Bun Brigade” – for messy, but self-explanatory, reasons – says Martin Cath, historian of Surrey Chess. They also played for Surrey in county matches in the 1960s. Martin Cowley adds this fascinating information about Brian Tombleson (though n.b. his name isn’t on the Trophy): he was a top junior in the late 50’s/early 60’s, was 1959 London Primary Schools Champion, 1960 London Boys Under-12 Champion, and was also placed well in SCCU junior championships. A couple of his games were published, one in Junior Chess Games by another S&B player Raymond Bott (and Stanley Morrison) and another in The Chess Apprentice (subsequently republished as More Chess For Children) by the same authors. Roger Emerson also remembers Brian from a Surrey Trophy game in 1979, though by then he had moved to Coulsdon. Like so many talented juniors, the other Sticky Bunnies may have dropped out of chess around the end of the 60s.

Mr. Drake went back much earlier, playing for the County in 1946, and on and off until 1972. Malcolm Lester was the son of another Streatham player W.J. Lester, and was playing for club and county from the late 50s up until the late 80s. He reported in Knightmare! 2 - in 1978 - on that year’s Club championship, which he won. But he wasn’t on the Povah-Best Trophy for that year, so maybe it had already slipped from memory; there is no mention of it anywhere in the three issues of Knightmare!. In the 1981/2 season Malcolm was mentioned in a club newsletter with a grade of ECF 176 (before the rating uplift of 2008, so into the 190s in today’s terms).

Malcolm Lester was, says Nigel, one of the Club’s stronger and more active players in the 1970s; and Robin Haldane also remembers him. In addition Nigel recalls R.G.W. Elwell and J.H.E. Drake. Mr Elwell was in the ECF grading list up to the year 2000 (at 171, old money), playing most recently for Willesden CC.

At the time of writing we have not yet decided what to do with the Trophy; but we had better not forget about it for another 4 decades.