This is the story of my adjournment versus the very pleasant and correct Chris Baker of Richmond and Twickenham (he is currently in the ECF 160s, like me). It was a Streatham 1st team London League match on 14 January. We were on board 10. The adjournment was played on 10 Feb.

In the game (one of those tiresome Closed Sicilian-cum-KIAs), I thought I had blundered away my Queen around move 22. I hid in the gents in disgust, then pulled myself together and, thinking that I shouldn’t alert my opponent (for some stupid reason I thought he wouldn’t see it), I went back and, putting on my best poker face, sat down. He was still thinking! I realised that he could only win a pawn, which he duly did, and we eventually got to this position, with me to seal. 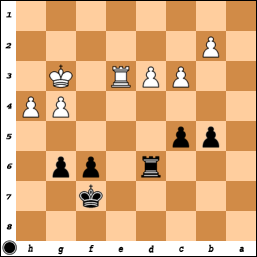 Somewhat chastened by my blunder scare, with a my frazzled brain screaming for everything to stop, and anyway without any real idea what to do, I played it safe and non-committal with 38…Rd5: convincing myself that this was a crafty waiting move allowing me to find a drawing line in the adjournment, which my opponent would have to spend wondering about other plausible options such as …Ra6, and …b4 (about which more in a moment).

So, now with my rook on the fifth holding up the creation of a passer with 39. h5 I pondered the adjourned position: I still had no idea what to do without wrecking my “5th rank defence”. Any kingside pawn move he gets an outside passer; …b4 or …c4 and gets a passed d pawn (in the former case after swapping and isolating my b pawn, which he will then gobble at leisure). Shuffle around and he strangles me until I commit hari-kari. “Help!”

Thankfully Angus usually helps out in these situations, and generously got his Stockfish to apply itself to the position. It showed an evaluation of getting on for +1.00, but as it analysed three of White’s plausible moves (39.Kf4; 39. Rf3; 39. Kf2) for 15 moves or so things slide inexorably and depressingly further downhill for Black in all lines. However Stockfish was exceedingly helpful in so far as for all of those three suggestions for White’s 39th it gave 39…b4 as the reply: which, whatever one thinks of …b4 as a move (see above), was at least easy for me to remember.

My opponent had of course refused my draw offer (made in vain hope rather than realistic expectation) and he quite properly reminded me of the resumption appointment the day before – which all suggested that he meant business.

We sit down, open the envelope, and thankfully it says what I thought I’d sealed: 38…Rd5. He thinks a bit and plays Stockfish’s strongest: 39. Kf4. Now a dilemma: do I play shuffle rubbish, or take the bull by the horns and play a move I didn’t believe, but that Stockfish told me to play: 39…b4, my antipathy to it being based on the fear of 40. cxb4 for all the reasons given.

Now, the curious thing was that in all the 3 long lines churned out by Stockfish, in none of them did it propose 40 cxb4 as White’s move after 39…b4 : I didn’t understand why not when looking at it at home, and I didn’t understand why not looking at the board at Golden Lane after his 39th. But nevertheless I played the pawn push – simply, and only, because that’s what Stockfish told me to do…(what is it all coming to).

Obviously Chris hadn’t been consulting Stockfish (in fact, as he said afterwards, he had something much more ancient) because he did what I imagine any player of our level would do (and that includes me), he took: 40. cxb4. There was nothing for me to do now but to automatically recapture 40…cxb4, and wondered what on earth I had done as I stared at my silly pawn on b4 ripe for plucking (and I think he was looking at it that way, too). I was still baffled by Stockfish’s proposals, and began to think it was leading me up the garden…

Naturally he played 41. Ke4 to support the d4 push. 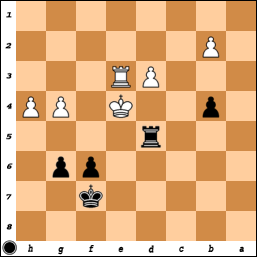 I was now outside Stockfish territory, and I was out there, alone. I contemplated the obvious 41…Ke6 shuffle, but reckoned I‘d be forced back in the not very long run after he’d played 42 d4 and attacked the b pawn with Rb3 . But why, oh, why I kept asking myself didn’t Stockfish recommend 40 cxb4 - ? Then it dawned on me: it opens the c file and Black can get there first, and although after 41…Rc5 42. d4 Rc2 43 Rb3 the b4 pawn falls Black wins one back on the King’s side after 43…Rh2 – and Black is doing something at last. Isn’t that what they say about these R+p endings: get active? Maybe that Stockfish knows a thing or two about endings after all.

Now that we had got there I contemplated the reality of what I had landed myself in: what a mess. 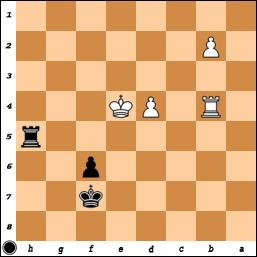 My heart sank: he has now got two passers, and a centralised King supporting one of them and a threatening Rook defending the other (albeit from the front) – and all I have is a sickly pawn on f6 that looks eminently blockade-able. Oh, and a draughty King, and a Rook that would rather be somewhere else.

The only chance (it seemed to me – I don’t know what Stockfish would say) was to get my pawn rolling, and that meant getting his King out of the way. So I checked with 46 …Rh4+ reckoning that if he goes backwards it allows me to carry on checking, and if he goes towards the Queenside he clears the path for my pawn (hoping that one of his won’t get there first), and that anyway he would probably prefer to have his king in a forward position - so he’d go to d5 to support the d pawn, in which case I’d check again. He then would have to go even further forward (otherwise repeat) - which looks like curtains, except it gives a clear run for my f pawn: a glimmer of hope (and anyway, what else?)

49. d5 (uh oh! – here it comes) Rh2 (Active rook! Attacks the b2 pawn and prepares to check if his K gets out of the way of the d pawn, otherwise attack it from d2 ) 50. Kd7 Kf6 (to threaten lateral checks and support the f pawn) 51. Rb6+ Ke5 (Yes! An active King as well!) 52. d6 f4. And now I began to see the drawing chance – in the adjournment I’d refreshed the little bit of endgame theory that I once knew: a lone pawn on the sixth draws against a lone rook, as long as the Kings are favourably placed, which they will be. 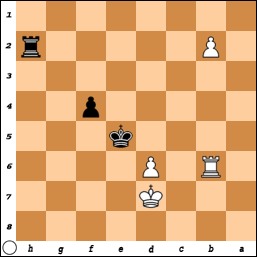 Thanks Stockfish (though I’m sure you’re going to tell me how he might have won from the 3rd diagram).