The Art of Luck in Chess

Martin asked if I would consider writing a piece about my experiences in the recent S&BCC Club Championship, which I was fortunate enough to win. I realised I was quite lucky to win most of my games, so I thought I’d concentrate on my lucky moments, of which there were many! I’ve also added the URLs if you want to play through the entire games on lichess.

Generally, I found the 15m+5s increment tricky to get used to, as I usually play 5+0 blitz on lichess. At times, I was playing too quickly or thinking too much. 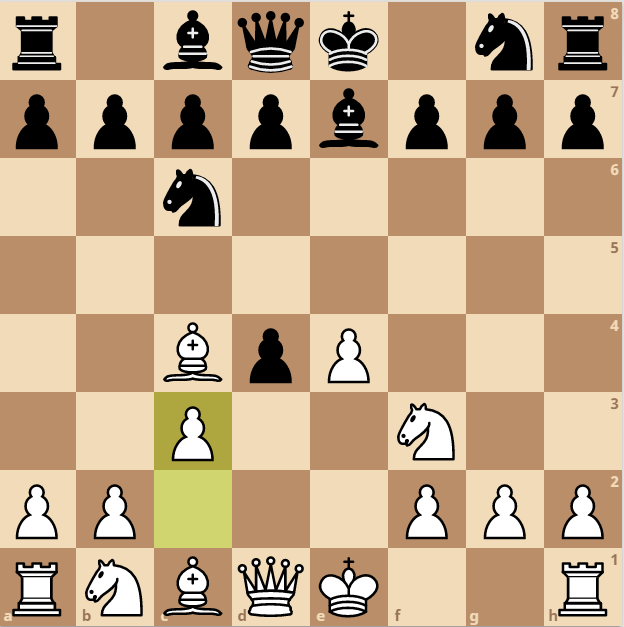 In R1, I was white against Paul Ritchie. I thought I was being clever in this position as early as move 5(!) with c3 because, if Paul took the pawn, I have Qe5 threatening mate, which can only be prevented by black giving up a knight on h6. (A similar position can often arise in the Scotch Gambit if black plays Bb4+ followed by c3, dxc3, bxc3 and then the natural-looking retreat Be7.)

Paul did indeed take on c3. But, in this case, after castling, my Bh6 is en prise and black threatens cxb2 wining my Rook. With hindsight I probably could have dropped my Bishop back to c1, but in the game I gave it back to shatter black’s K-side with Bxg7. 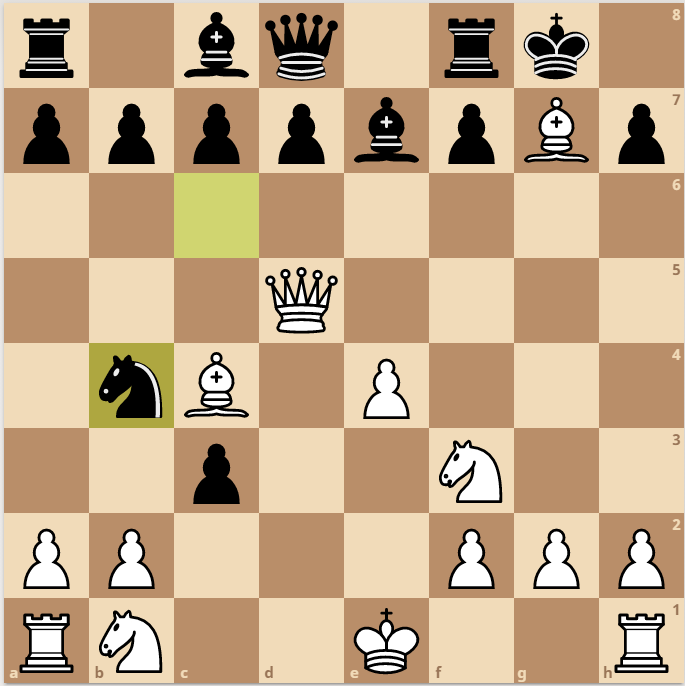 Then, a few moves later, I played 9.Qe5 (see diagram right). I’m sure Paul smelt a rat as to why I hadn’t dropped the queen back to d1. If Paul plays Nc2+ and takes my Rook, I just follow up Bh6 with a forced mate (as the f7 pawn is pinned), but I forgot black can interpose with Bf6. Oops! Fortunately, Paul played 9… Bd6 here and I just recaptured on c3 with my queen, a piece to the good. Paul fought valiantly but in the end I was able to convert my material advantage. 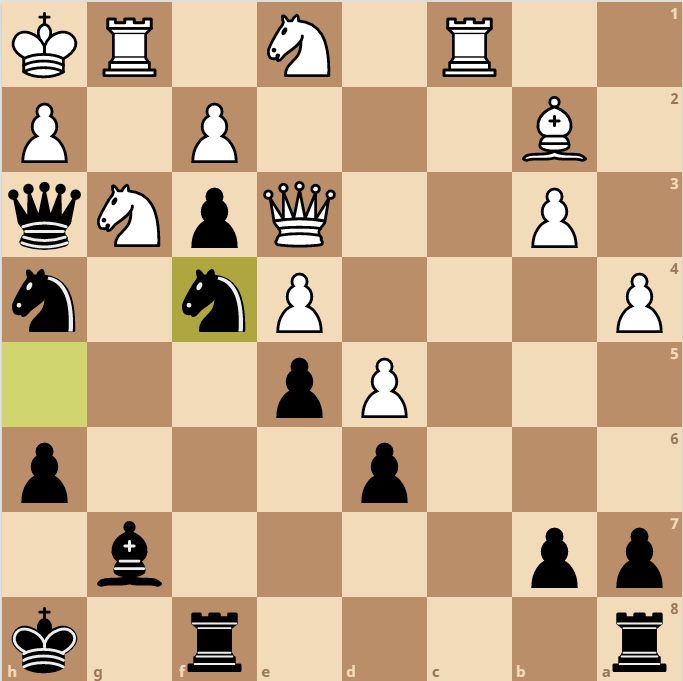 R2 saw me paired against Michael Chung, who has always given me tough games online, despite his lower rating. On the black side of a Pirc, it was a race on different sides of the board as I rushed my kingside pawns towards his king, while he was slower getting going on the queenside. I thought I was going to open up his king, but it wasn’t as straightforward as I realised as Michael stuck it on h1 and my attack was petering out.

In the diagram (right), Black’s last move had been 27...Nh5-f4 (when Droidfish points out dropping the knight back to f6 followed by g4 is much better – sometimes moving a piece backwards is the correct option!). Play continued 28.Nxf3? Nfg2? (28… Nxf3 29.Qxf3 Nd3 is crushing for Black) 29.Nxh4 and Michael had forgotten his queen was hanging – 29...Nxe3. I was able to check mate him a few moves later.

I was white against Alan Romeril in R3. A Bb5 Sicilian was level-pegging. Alan refuted my less than subtle attempts to mate him on the kingside, and it looked like we might repeat moves. To avoid this, I decided to give up a pawn to activate my pieces, which didn’t achieve much beyond getting ride of one of my opponent’s bishop pair, so we were left with Q+2R each, with opposite-coloured bishops, and me a pawn down. Alan snaffled a further pawn on the Q-side, but I created some attacking chances by desperately shoving my g-pawn forward, which led to a forced swap of queens and I got one of the pawns back. With R+B each and a pawn down, I offered a draw which was accepted. My pawns were on the same colour as my bishop and I thought I’d be able to hold the draw. Luckily, Alan agreed!

I knew it would get tougher on the second Thursday. As I was one of four players on 2.5, I was paired with the black pieces against one of my co-leaders in R4, Graham Keane, by ECF grade (199) the strongest player in the competition. We transposed into a Pirc and he launched an aggressive attack on my king (this is an occupational hazard if you play the Pirc!).

We got to the following position (which Droidfish actually assesses as being better for me – which I didn’t think during the game). 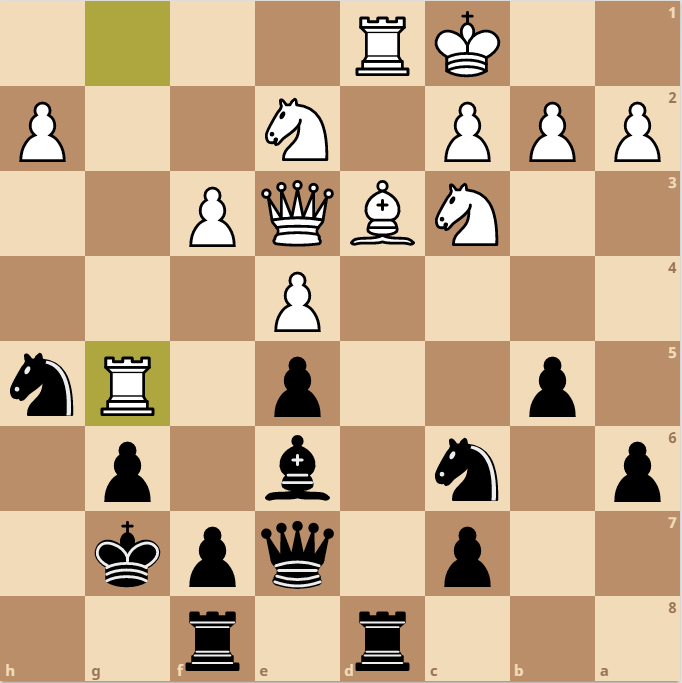 I played 17...f6 (which I was quite pleased with, but Droidfish much prefers 17...Rh8). Graham gave up the exchange with 18.Rxh5 to prise open my King. I was attempting to keep the Bd3-h7 diagonal closed. Then he gave up a knight to try and land the knockout blow. Lots of ways for me to go wrong! I was a Rook up but I gave back the exchange to leave me with Q+R+B+N+3p against Graham’s Q+R+N+5p. Graham then gave check with his knight, and I could have swapped it off for my rook but we were down to about 10 seconds each and surviving on 5-second increments, so we repeated moves and split the point.

In R5, I knew I’d be facing Martin Smith, the tournament ‘2nd seed’ (168 ECF). He had won in R4 by beating Alan so was half a point ahead of me: only a win would do! My record against Martin on lichess isn’t anything to write home about (before the game, he was 4-1 up). Unfortunately, I played my King’s Indian very passively and my pieces were poorly placed. My king was fairly secure on the kingside, but Martin had castled long and I was struggling to land a blow. Droidfish had Martin as better for most of the game, and he gave me plenty of chances to go wrong, but I hung on (which involved avoiding several queen swaps). 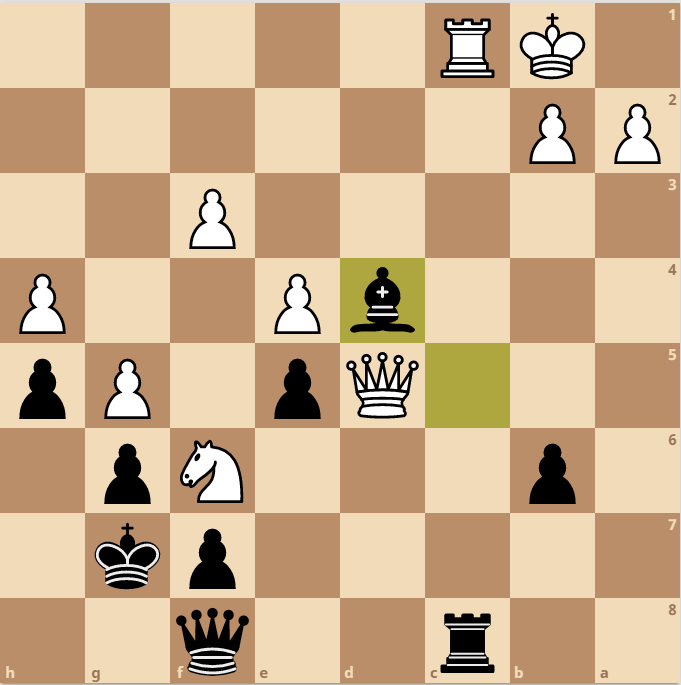 In this position, I’d actually managed to equalise. Martin played 46.Rc6 here, but is lost after my reply 46...Qb4 and he resigned after a long think.

In the final round I was paired against Lawrence Wakefield, an unknown quantity for me. I was able to build up a big lead on the clock as his pieces got in each other’s way and my moves largely played themselves. Lawrence commented afterwards that “I think all my pieces were on the wrong squares for a very long time”, which is probably a fair summary. In time trouble, he dropped a few pawns and then a rook before he threw in the towel. This was probably the only game where I felt like I was in control of events.

Graham and I both finished on 5/6 and, as we’d drawn our individual game, we had to play an armageddon finish. As white, I had 6 mins to Graham’s 5 (no increments), but he only had to draw whereas I had to win. I had to give up a pawn to escape an annoying bishop pin and we got to this position. Still time for one more slice of luck! 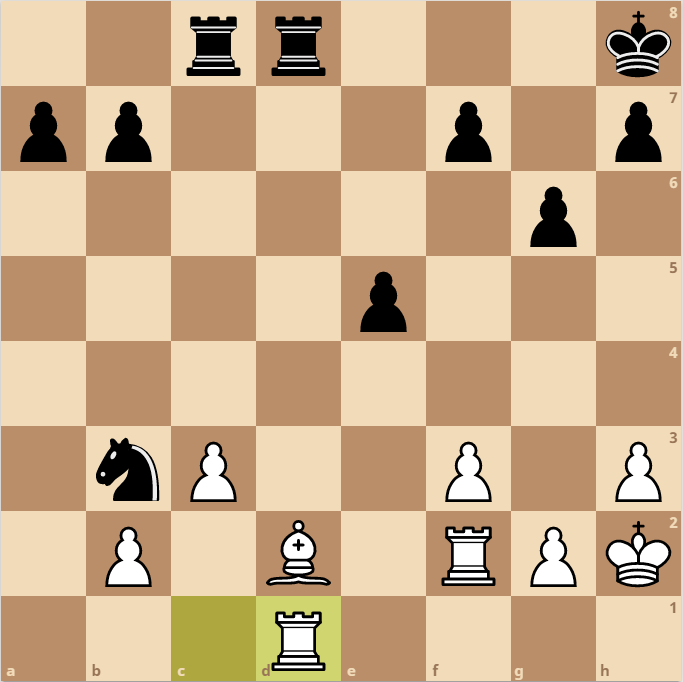 Graham played 27...Nxd2 here, when just doubling the rooks on the d-file would have won the bishop (as my rook is pinned) and the game. I was a pawn down in a rook ending but managed to win on time as I was moving faster – Graham said he’d forgotten we weren’t using increments.

As an aside, I can recommend How to be Lucky in Chess by David LeMoir, one of my Norfolk team mates. Lots of practical tips!