On December 19th 1930, the Brixton Free Press reported on an historic match in the London League between old friends and rivals Brixton CC (one of the forerunners of S&BCC) and Battersea. Their battles were known as the Brickbats. In the 1930s they contested for the League title along with Hampstead and Lud-Eagle clubs (both long since departed). Brixton won the League in 1932/33, Battersea in 1934/5. Some of you may recognise the name of Harry Golombek (1911-1995) on board 5 for Brixton. Later he became a respected figure in the national and international chess scenes, but he started his chess career with Brixton CC when a schoolboy. 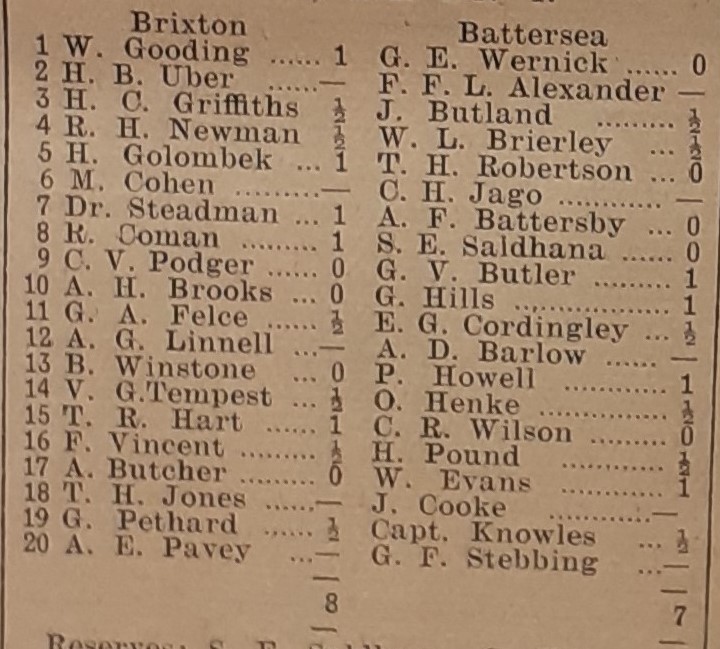 On February 21st 2021 we reprised the Brickbat matcheswith a 12-board junior match on Lichess (2 games at 10 + 5). Streatham junior regulars were joined by some chess students of member Phil Makepeace. We went down fighting 8-16.

It was tough for our guys, but everyone gave it their best shot in making this little piece of history. Special mention for Amar’s titanic board 1 battle against super-strong Denis Dupuis: a magnificent struggle in all phases of the game. Amar lost but fought to the bitter end. You can see it here: https://lichess.org/QLD47ljk. And there was a nice finish by Cyrus Buckman in his game on board 3   https://lichess.org/tjjY2D4g beginning with a sac on h3.

Thanks go to Angus for efficiently controlling the match in conjunction with Aaron Holloway-Nahum of Battersea CC.