You can see and/or download the S&BCC Newsletter 1966/7 here. We have number 1 (January 1966) through to number 12 (August 1967), though unfortunately number 11 is missing. Below I give a digest of the series, which is interesting for its snapshot view of the club, its activities, and its membership, 50 years ago.

We have number 1 (January 1966) through to number 12 (August 1967), though unfortunately number 11 is missing. Below I give a digest of the series, which is interesting for its snapshot view of the club, its activities, and its membership, 50 years ago.

The newsletter editor was Mr. R. E.Boxall (78, Valleyfield Road, S.W.16), who was the Club’s match captain in January 1966. The first issue set out its stall: to appear once a month, with details of dates of Club meetings and fixtures, match results, and pairings/results of the Club championship. Apart from doubling up for April/May and June/July it managed “once a month” up to No. 9 in November, and then tailed off until issue 12 in August 67, which may have been the last.

Miss D.M.Holmes was thanked for her “very generous offer…to provide funds to complete the purchase of clocks to bring the number of reliable units to ten” (No 6, August 66).

The Newsletters report in detail on the progress of the Club Championship for 66/7, organised by Mr P.C.Wood - it was taken over by Mr R.G. Rusha for the next season (who some current members may remember as a recent member of Wimbledon CC). The 1966 champion was A.J.McMinn (after a play-off with Dr. P. Howarth), and congratulations were offered to him (No 6, August 66) “on retaining the shield.” His name appears on the Povah-Best Trophy for 1966, perhaps confirming that it was indeed inaugurated for that purpose. The 1967 champion was David Le-Surf, who is also on the Povah-Best Trophy, for that year. Number 9 of November 1966 gives a list of Club players who appear in the “recently published” grading list for 1965/6: 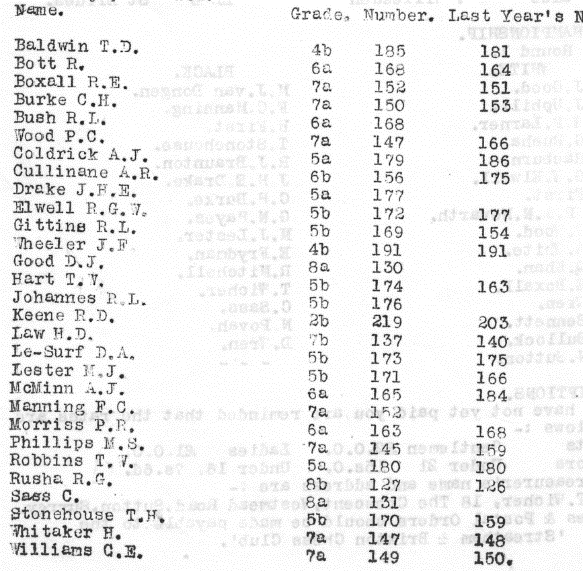 A few comments on some of the names, starting at the top.

Baldwin T.D. - mentioned No 7 September 1966 as “joint holder” of the British Under 18 Championship (together with Simon Webb of Purley).
Bott R. - chess author Raymond Bott.
Drake J.H.E, & Elwell R.G.W, Le-Surf D.A, Lester M.J, McMinn A.J - all appear on the Povah-Best Trophy.
Johannes R.L. - “congratulations on winning the Under 16 Title” in the London Junior Championships (No 1 Jan 66).
Keene RD - well known GM, chess author and entrepreneur. “Congratulations… for his fine performance in winning the [Hastings Congress Christmas 1965/66] Challengers Trophy” (No 1 Jan 1966).
Manning F.C. - for many years active in Surrey chess, sadly died a few years back.
Morriss P.R. - had an essay in “Philosophy and Chess” discussed on the Streatham and Brixton Chess Blog here.
Williams C.E. – reported No 12 August 67 as the new President of the Surrey CCA.

In addition the following also appear in the Newsletter:

Harry Golombek – “it was resolved to ask Mr H. Golombek to become an Hon Life Vice President. Mr. Golombek was for many years before the war the leading player of the BRIXTON chess club. This was of course before the union with the STREATHAM club to form the present club. He has many very notable feathers in his cap amongst them being, 3 times British Champion (1947, 49 and 55), also holds the titles of International Master and Judge from FIDE.” (No 6, August 1966).

Mr L.N.Weaver – “It was with deep regret that it was made known at the AGM that Mr Weaver had died last Autumn. He was for very many years an active official of the club. After retiring he moved first to first to Welling in Kent, and later to Sussex. When he retired he assisted Mr Keeble in organising the County Matches at John Lewis’s” (No 6 August 1966)

David Raeburn - mentioned playing in the Club Championship – previously David Rabinovitch, he was a London junior champion before the war, a POW in the Far East where he played chess in Singapore. He was active in Surrey and Croydon League Chess into the 70s. He was friendly with Ron Rusha who I interviewed on behalf of Olimpiu Urcan (well-known chess historian) when researching Singaporean chess history. David was well-known for furiously fast long distance walks (eg London to Brighton in a day).

Most of this material is in a good to reasonable state, but some needs attention. The printed version was very professional with league and tournament results, game scores, opening analysis etc, as you would expect from any decent chess magazine. The duplicated version was competent, but less impressive for obvious reasons. There is an entry in Di Felice’s Chess Periodicals Bibliography, though it doesn’t quite seem to accord with the numbering above. There is no reference to it, as far as I can see, in the British Library Catalogue.